Home - Blog - Alignment means that you enter your client’s ‘model of the world’.

Alignment means that you enter your client’s ‘model of the world’. 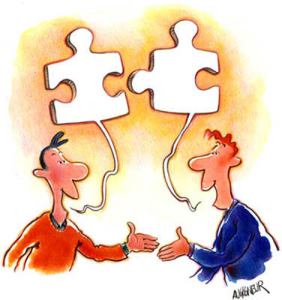 This article was written with Inna Vainberg,

talented coach and my wife. 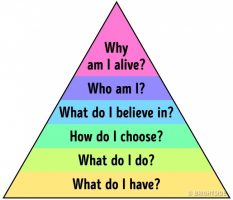 For several months I have been running a series of workshops “Manager’s Toolbox” that was ordered by the Open Business SchoolOU). And then yesterday, during a seminar about cross-cultural communications, I suddenly get the question: “What if a person sees that you are pacing him and it is terribly annoying to them?”

What do you do to make sure that attempts to pace your interlocutor do not irritate him? The question of what is annoying to a person to pace him has put me at a dead end. It’s true. Because I’m sure it’s not the pacing that’s annoying, it’s more of a lack of pacing. Well, for example, as if I told you that yesterday died my beloved cat, who lived with me for 19 years and became a member of the family, and the other person tanned and told a joke in response. Or if I had made a joke in some situation and saw that everyone was sitting with stone faces. I am sure that if the person I am talking to is in a tune-up, he can not annoy me. And if he’s annoying, then he’s not in rapport.

Let’s talk about pacing. And we’ll move away from the trivial “mirroring” stuff. There’s a model called the Dilts’s pyramid. According to this model, we perceive the world consistently, from more tangible things to more abstract. Let’s consider the phenomenon of “pacing” in terms of this model.

The first level is things, objects. What do I see now, sharing space with the person to whom I intend to pace? What is my focus on perceiving this space? What is the focus of perception of my vis-a-vis? What does he/she see in this space, and what is the common area for us? Can I influence the expansion of the shared space?  It is a general pacing scheme on the example of the object level, which can be applied at any level of the Dilts’s pyramid.

The second level is an action. The third level is abilities and capabilities. The fourth is beliefs and values, and the fifth is identity (who I am), the sixth is mission (what I live for).

Thus, pacing in the NLP is a conscious attempt to look at the world through the eyes of another, preserving the awareness of their view. It is an attempt to understand other people’s behavioural patterns. After all, one of the ideas of NLP – “modelling successful behaviour leads to success”.

But then what is annoying? Are we afraid that someone will “steal” our successful strategy and become just as successful? Mmm… maybe, but I’ve never seen really successful people this scared. Well, then what?

On level one, we can pace using different levels of Dilts’s pyramid. I can dress in the same style as my companion without trying to speak at a work meeting in a tailcoat and bucket or going to the minister’s reception in worn hole jeans. By the way, I loved coming to the board of directors or the ministry when I was young, with my brown jeans and my old sweater … and that was a huge mistake. Yeah, you’ll be remembered for that. The question is, how you’ll be remembered.

We can pace with mirroring gestures. It’s pacing by level two, by the level of activity.

And what happens if we are paced at the first two levels, but entirely without the smallest pacing to the level of abilities, beliefs and values, identity? It’s going to be a masquerade. The person with whom we communicate will experience the strongest dissonance and, as a result, distrust, fear, aggression.

A little later, I will tell you how to adjust to your abilities, beliefs, values and identity.